The City of Shakopee is rich in history. Once a trading post and then a small river town, the city is now a growing suburb to the Twin Cities metropolitan area.

Located in the lower Minnesota River Valley, Shakopee has been home to Native Americans for thousands of years. Burial mounds in Memorial Park date back approximately 2,000 years.

At the time of the first European settlers, Dakota Indians inhabited the valley. Chief Shakpay I settled his tribe along the river banks in the 1700s; his village was called Tintonwan, “village of the prairies,” and located east of Shakopee’s present downtown. 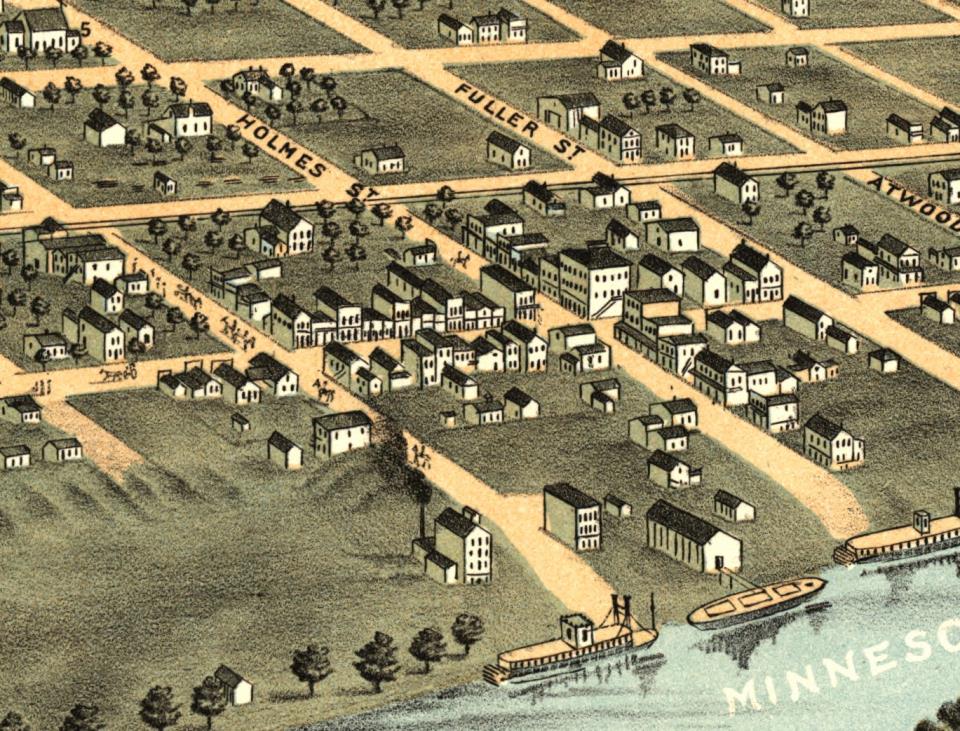 In 1842, the first steamboat came down the river as far as Shakopee, and two years later, Oliver and Harriet Faribault built the first log cabin along the river. Missionary Samuel W. Pond came to the area in the late 1840s, at the invitation of Chief Shakpay II. Pond would later found Shakopee’s oldest church, First Presbyterian Church, in 1855.

In 1851, with the Treaties of Mendota and Traverse des Sioux, the area was opened to pioneer settlement. Thomas A. Holmes, known as “the father of Shakopee,” established a trading post near the Tintonwan village. Shakopee was designated as the Scott County seat on March 3, 1853.

In 1854, Holmes platted Shakopay Village, naming it after the leader of the Dakota band, Chief Shakpay II.

Shakopee’s city status didn’t last long. In October 1861, the state Legislature passed an unusual state law in which the city’s charter was surrendered and it fell back under the township government. That didn’t stop settlers from coming to the area. At the beginning of 1860, Shakopee had a population of 1,138, many of German descent.

For many years, steamboats along the Minnesota River were the most efficient way for people and goods to reach the young city. However, in the mid-1860s, a new method of transportation arrived: railroad. The first steam engine train rolled into Shakopee from Mendota along Second Avenue on Nov. 16, 1865.

On March 3, 1870, the City of Shakopee was again incorporated. Ten years later, the Lewis Street swing bridge opened, the first across the Minnesota River in Shakopee. 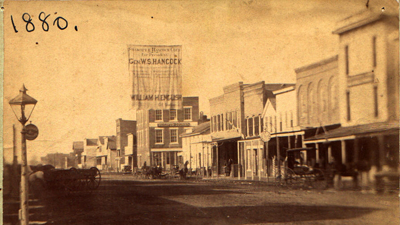 Business prospered in Shakopee with the opening of the Jacob Ries Bottling Works in 1872; Schroeder Limestone Kiln and Brickyards in 1876; George F. Strait & Co. flour mill in 1878; and Minnesota Stove Co. in 1891. The city was also known at the time for its lime and brick industries. Many downtown businesses were built with the red “Shakopee” brick.

Following the Great Fire of 1879, the Shakopee Fire Department organized in 1883 – the same year a two-story City Hall was constructed on the corner of Lewis Street and Second Avenue. The department’s original bronze bell is still on display at Fire Station No. 1.

The beginning of the 20th-century brought many changes to Shakopee. A municipal electric system was established and electric lights were turned on for the first time on Good Friday evening, March 28, 1902. The city dug its first well to supplant “foul river water.” It served the City until 1991.

While cars began to arrive in Shakopee, the railroad remained an integral link to the outside community. In October 1911, President William Taft greeted citizens from aboard a train at the Shakopee Depot. 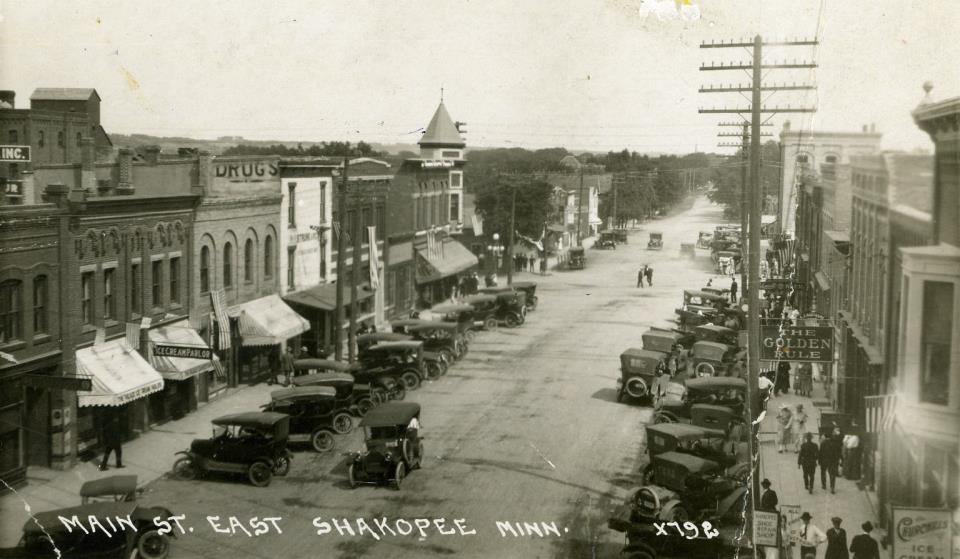 During the Prohibition era, Shakopee had the reputation as a “Little Chicago” with a past that included illegal gambling. In 1940, an extortion ring was discovered as merchants paid to avoid raids on slot machines.

Shakopee also showed signs of progress in the 1920s, electing its first female Mayor, Elizabeth Ries, in 1925.  In 1927, Holmes Street bridge was completed linking Shakopee to Chaska. The bridge was recently restored by the Minnesota Department of Transportation.

The 1930s also marked the end of one of the area’s longest-running businesses, the Strunk/Nyssen Brewery, which had been operating along the Minnesota River since 1854.

The city finished the decade with a population of 2,416. 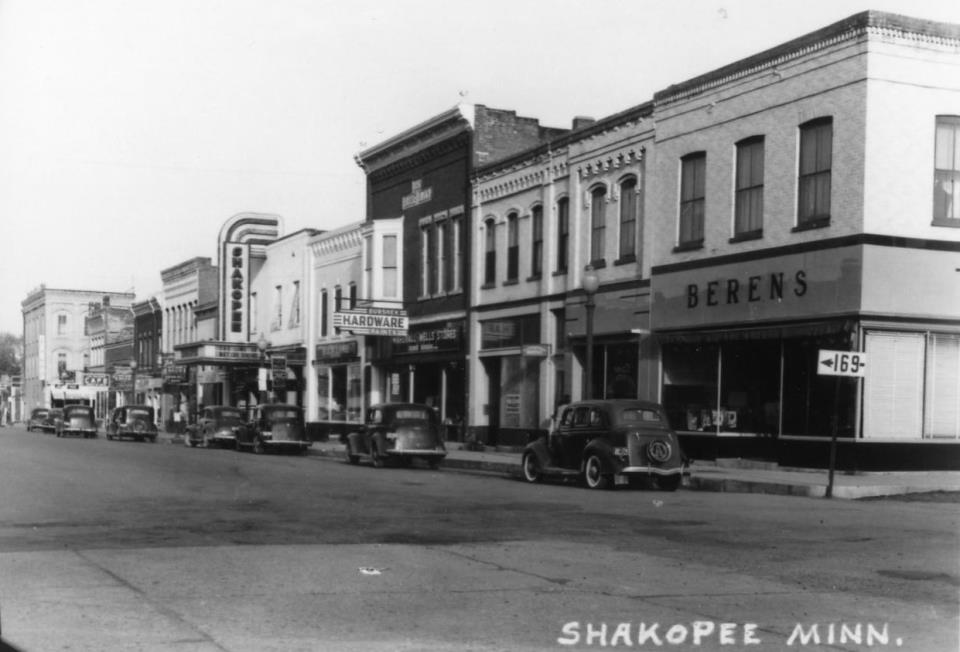 The city saw many changes following World War II. A new 250,000-gallon, all-steel welded water tower on 10th Avenue was hailed as the largest of its kind in the world. In 1950, the Shakopee Common Council approved the establishment of a public utilities commission, and in 1954, Shakopee built a new fire station on Second Avenue.

Shakopee’s economy began to shift in the 1960s with the development of the Valley Green Industrial Park, the metropolitan area’s largest ready-to-occupy industrial park.

The flood of 1965 poised major challenges for the river town, cutting off access to the north. During the flood, Police Chief R.G. “Pat” Thielen was known to ferry commuters across the river by boat.

In 1969, a living history museum, Murphy’s Landing, was established on the site of the area’s original ferry route. The Three Rivers Park District operates the park today.

Valleyfair Amusement Park put Shakopee on the map when it opened in the city in 1976. The park has since grown to include more than 75 attractions on 90 acres. It draws more than one million people to Shakopee every year.

In 1985, a new horse-race track, Canterbury Downs, opened to much fanfare. In 1994, the track was renamed to Canterbury Park, and today live racing, a 24-hour card club and entertainment events annually draw more than 600,000 people.

The opening of the Bloomington Ferry Bridge in 1995 has spurred unprecedented growth in the city, which saw its population double in the succeeding 10 years. The new bridge opened the city to new business and residential growth, making it accessible for people looking to work in the metro but enjoy the atmosphere of a small town.

The new growth brought the need for new city buildings. Shakopee Fire Station 1 opened in 1998. Both a new Shakopee Police Department and a new Public Works building were completed in 2003. A new public library also opened that year.

In 2007, the city celebrated its 150th Sesquicentennial with a celebration that included the opening of Huber Park along the downtown riverbank.

In 2010, the City of Shakopee had a population of 37,076. Improved transportation systems, available land and recreational amenities continue to make Shakopee attractive to businesses and residents.

In 2017, the city opened its new city hall building on Gorman Street, creating a city campus to better serve customers. The city also wrapped up a two-year renovation of the Shakopee Community Center, which included in a two-sheet ice arena, indoor aquatic center, senior lounge and much more.

Much of this history adapted  from "The Shakopee Story" by Julius A. Coller II

For more information about the history of Shakopee and Scott County: