Extending the life of your street

Minnesota weather can be hard on a street. The heat, the cold, the sun, the rain, the snow—all of it wreaks havoc on our pavement and underlying road beds.

Keeping city streets in good condition requires a pavement maintenance program that protects against road damage and spots issues before they result in crumbling infrastructure.

The Engineering Division is moving toward a more objective way of evaluating street conditions by rolling out a pavement rating system.

All city streets are rated on a three-year basis. City Council will be asked to set an average standard for city streets. Computer software then uses data from multiple sources to prioritize projects based on available funding.

"It helps us determine what is the most cost-effective way to target the streets that will benefit most from an overlay or rehab," Assistant City Engineer Ryan Halverson said. "It's a more empirical way of establishing a plan."

The system will also help the Engineering Division create a 15-year capital improvement plan, one of the 2020-24 strategic plan initiatives, by helping better forecast how streets are performing. 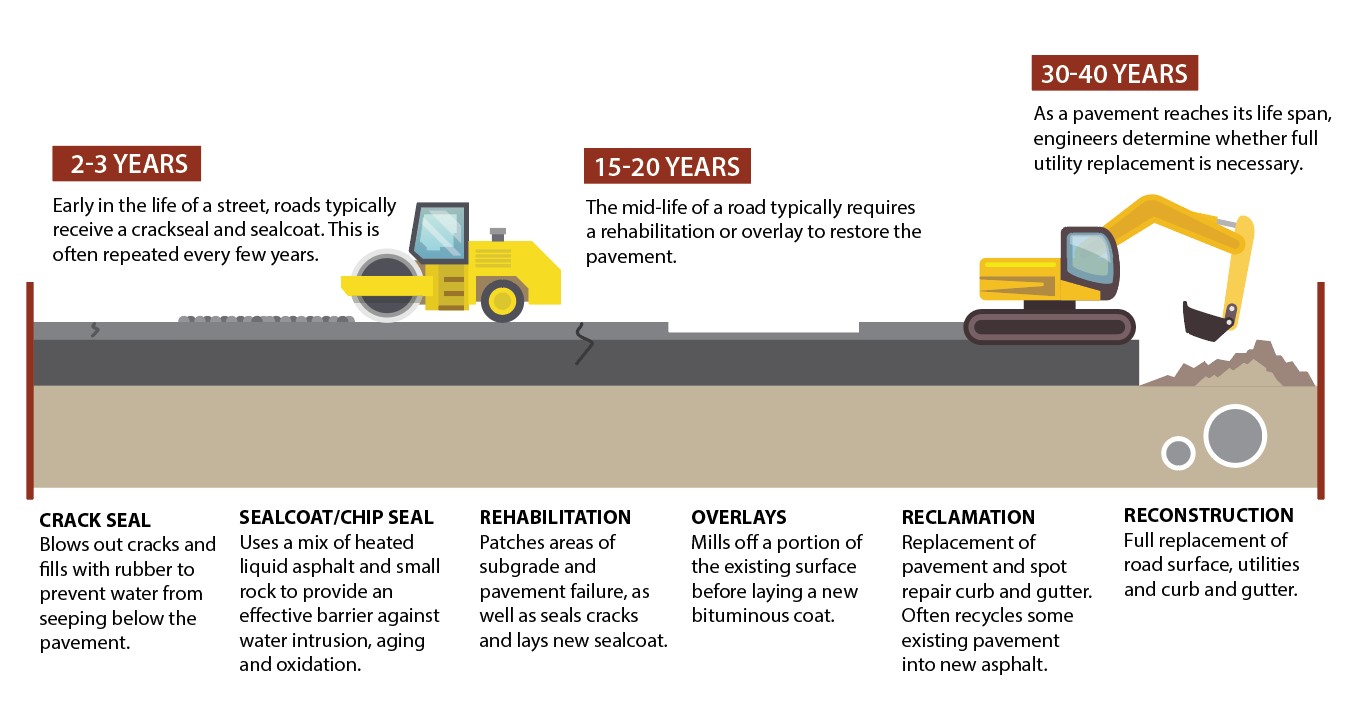 Prioritizing street projects is particularly important as the city prepares for a bubble of streets reaching its 20-year mark. Shakopee's fast growth in the early- to mid-2000s resulted in substantially more miles of new streets, all of which are at their mid-life period and require more investment to extend their life.

In 2020, the City Council approved additional funding to expand the city's pavement preservation program. Sealcoating, also known as chip sealing and one of the main preservation strategies, has been shown to extend the life of a street sometimes up to seven years for a fraction of the cost of a new overlay.

"The funding we put into the minor maintenance are dollars well spent down the road," Halverson said.

However, no plan is fail safe, as many factors impact street condition. From underlying soils to when it was constructed, all roads perform differently.

"Our timeline is only a general guide, not a concrete system, for how the city maintains any particular street," Halverson said. "But, it's a good way for us to ensure we're doing what we can to extend street life as long as possible."

Learn more about the city's pavement maintenance projects at www.ShakopeeMN.gov/roadprojects.

Sun and moisture are two of the biggest influences on road condition. UV rays can break down a pavement surface while moisture seeps through cracks and deteriorates a roadbed.

Where you live can have a definite impact on road performance. For example, underlying soils high in silt and clay do not typically last as long as road built on gravel.

Engineering standards have changed over time to improve the performance of streets, allowing some street sections to last longer while others fail.