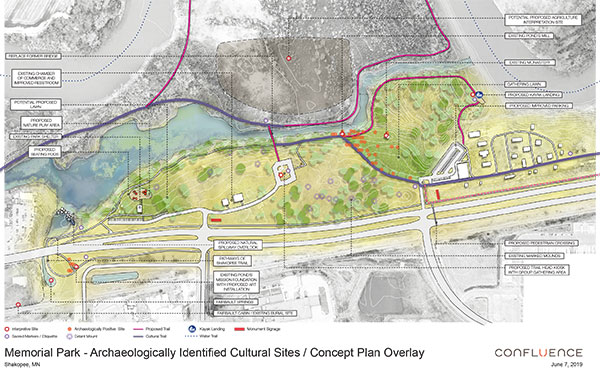 Shakopee holds the histories of many peoples, from the Dakota to the European settlers who founded the city in 1857.

To celebrate that history, the city is partnering with the Shakopee Mdewakanton Sioux Community, Scott County and Three Rivers Park District, who operates The Landing-Minnesota River Heritage Park, to create a cultural corridor that preserves the area's history, enhances visitors' experience and protects the resources from future degradation.

The Shakopee Cultural Corridor includes a cultural trail that offers a glimpse into the lives of past inhabitants of the region. One of the ideas is to use augmented reality to help visitors experience what the area was like when it was the original Dakota village and later a major river port.

"The cultural trail will put Shakopee on the cutting edge of education technology with a fully immersive augmented reality experience," said Senior Planner Joe Widing. "It would allow visitors a glimpse into the practices, rituals and daily life of both Dakota inhabitants and European settlers as they lived in the early- to mid-19th-century."

The trail could also provide unique opportunities to see first-hand native farming practices with native plants, a Dakota talking circle, multiple new river overlooks and an opportunity to kayak or canoe along the Minnesota River.

Among the early projects is the removal of the aging playground structure and east shelter at Memorial Park. The playground will be replaced with a formal “nature play” area on the west end of the park.

City staff are also working with local veterans organizations to discuss the possibility of curating a new veterans memorial at Huber Park. The American Legion Post 2 has expressed interest in relocating the 2020 Memorial Day ceremony to Huber Park to take advantage of Huber Park's event space.

The overall vision of the Shakopee Cultural Corridor is anticipated to take several years to achieve, as plans are dependent on funding and riverbank stabilization.

However, city leaders believe the unique partnership could create a cultural attraction that could one day stretch from Shakopee to Fort Snelling and honor the rich Native American history along the banks of the Minnesota River.

"This is a unique space where residents and visitors can go to both celebrate and contemplate the complicated, intertwined history of the Native American peoples and European settlers," Widing said.

Would run along the Minnesota River through:

This story originally appeared in the Winter 2020 Hometown Messenger.