CORONAVIRUS (COVID-19) UPDATES: City facilities are open to the public. The Shakopee Community Center will reopen July 6. Find the latest updates at www.ShakopeeMN.gov/covid19.

After 37 years, Dave Judd hangs up his bunker gear 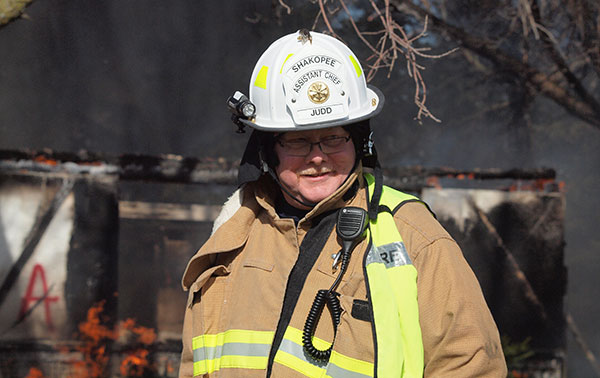 “I tried on the gear and I was sold,” Judd said. Convinced by his friend, who also served on the department, he sent in a membership postcard and joined the team.

Now, 37 years later, Judd retired from the department in August, having played a crucial role in the fire department’s push toward strategic fireground training and operating guidelines. Many principles are still used as the department arrives on scene today.

Focusing on the health of the organization was important to him. Judd served for nine years as a training officer, a position in which he helped develop the skills of countless firefighters in Shakopee.

“When we started implementing our training, we did it together to help advance the effectiveness of the organization,” Judd said.  “It was really all of us working together finding a way to train our team in a strategic way.”

Judd saw improvements first hand when he was promoted to assistant fire chief in 1997 and again in 2009, a role he’d hold for the next 11 years. “Seeing all that you’ve trained on and applying it on the scene, and succeed, is really a treat,” Judd said.

Over the course of four decades, Judd has had the privilege of working with many talented and dedicated first responders. “It’s amazing to have been a part of this group,” Judd said. “These are people that are happiest when they are sweaty and dirty and have done their job; when they’ve contained a fire, gotten a heartbeat and when they’ve made a difference.”

Judd also thanks his family for their support. “My wife used to throw the garage door open so I could run off to a fire,” he explained. “To this day she gets up in the middle of the night with me when I’m called off to a scene, and I am very grateful for her support.”

At its Sept. 3 meeting, the City Council honored Judd for his longevity with the city. The part-time firefighter undoubtedly made full-time impacts on the organization he dedicated his time to. “It’s been an honor,” Judd said. “The Fire Department is the biggest thing in my life other than my family.”