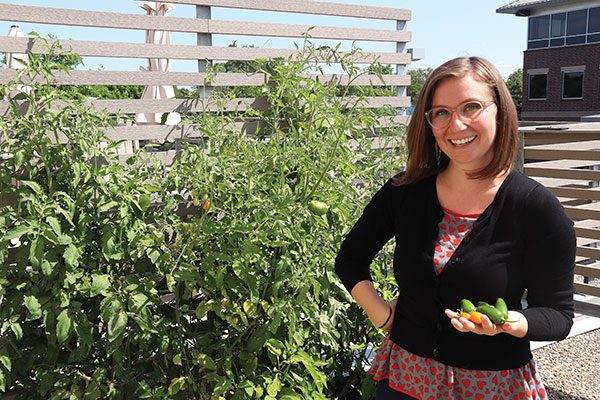 Flat rooftops often go mostly unused. That was the case at Shakopee City Hall—at least until this summer.

In June, City Planner Liz Bushaw pitched the idea of planting a garden on the roof. "I am a big advocate for people being closer to their food systems, and there was plenty of space on the roof, so I thought it was a cool opportunity for city employees,” she said.

“We’ve got a lot more than you might think we could have,” Bushaw said. “We’ve got cucumbers, herbs, basil. We had cilantro, a lot of tomatoes, beets, onions. Just a ton of stuff.”

Staff members tend to the garden on their breaks. As fruit and vegetables spring from the small plot, city employees can pick them for use at home. With the success of this year’s garden, Bushaw plans to plant more next year.

“Next year, my hope is that we’ll have enough to give to local food shelves,” she said.

Bushaw’s passion project is more than just an exercise; it’s a way to connect with what she describes as one of the most human experiences a person can have.

“Putting something in the ground and really having no idea if it’s going to work or not is kind of terrifying,” she said. “But it is so rewarding.”

This story originally appeared in the Fall 2019 Hometown Messenger.