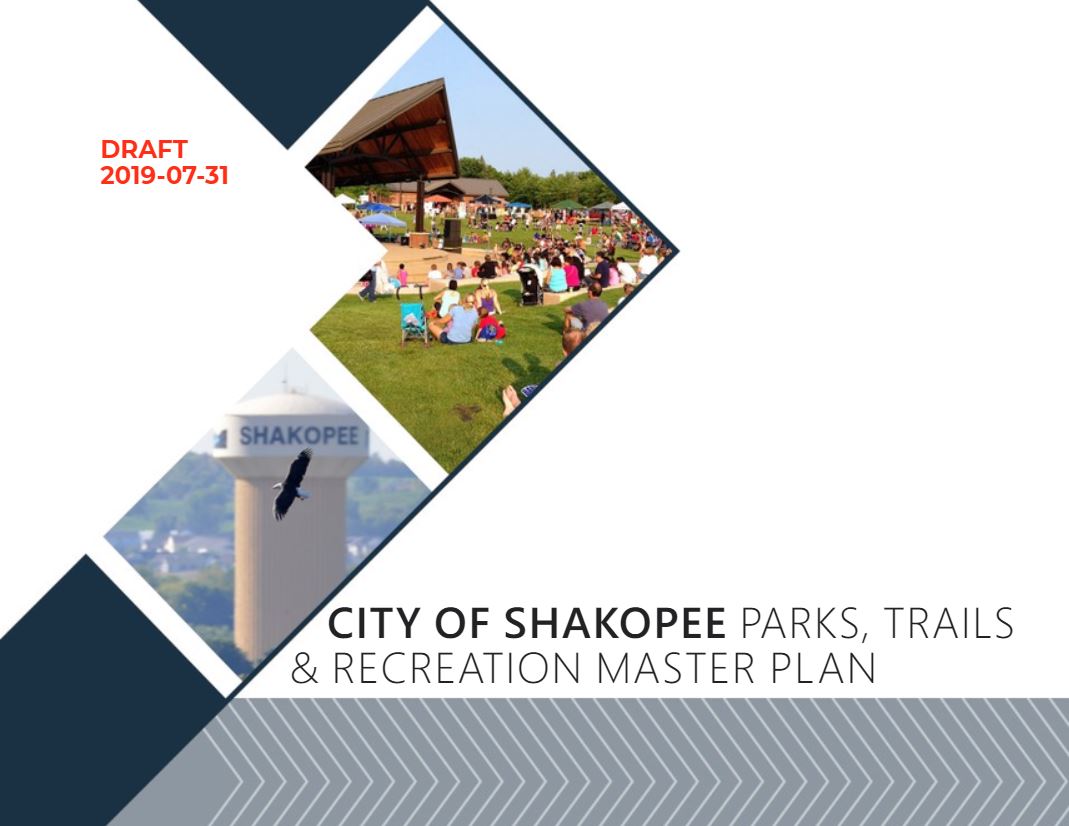 Throughout the Envision Shakopee process, one message was clear: You want community spaces that embrace the city's natural spaces and riverfront while celebrating opportunities for recreation for all.

The city's Parks, Trails and Recreation Master Plan lays out the city's future vision for its parks and trails, providing city leaders a road map for park development and redevelopment.

Over the past year, city staff have been working with its consultant team and a 15-member Parks, Trails, Open Space and Recreation steering committee to develop a park plan that reflects the community's overall desires.

The key themes of the plan include:

Among the proposed ideas in the plan:

Coordination between Shakopee, Three Rivers Park District and Shakopee Mdewakanton Sioux Community will shape the future of Memorial Park. A planned cultural trail linking the past of Shakopee to the future would bridge cultural divides by offering a glimpse into the lives of the region's past inhabitants, including both early European settlers and Native Americans. Other priorities include expanding access to green space, a natural playground and access to the river at a kayak boat landing.

Huber Park is an anchor for downtown Shakopee, but many feel it is time for an update. A new destination playground is planned to give children a one-of-a-kind experience. A dog park and kayak launch are envisioned to bring more activity to the eastern portion of the park. Improvements to the amphitheater, expanded green space under Highway 101 and a Veterans and Conflict Memorial are planned at the site. A new rock retaining wall along the river, an enhanced natural stream and storm water management pond will help reduce the impacts of increased flooding events.

Windermere Park will sit on one of Shakopee’s highest points and offer a unique experience for all. The plan calls for a children’s park designed around the natural landscape and incorporate a more explorative play area concept. Development along the bluff would create a natural trail system for biking, hiking or walking. Relocation of Shakopee’s archery range and an additional dog park for the western side of Shakopee are also planned on this site. All of this will be connected by a green trail system throughout the bluff area.

Re-envisioning of the current Upper Valley Drainage Way Trail into a more scenic and naturalized trail lined with native Minnesota flora and trees with bike repair and stations along the corridor. Additionally, street crossing improvements are envisioned to be made throughout the corridor.

The planned development of this park will include a 4-mile mountain bike course, an obstacle course children’s playground, a kayak boat launch, swimming beach and improved boat launch ramp. All of this would be accessible by a planned pedestrian bridge across Highway 169 and a new trail along 12th Avenue.

In August, the city unveiled its Master Plan draft for public comment. The City Council is expected to review the plan at its Aug. 20 meeting. To view the plan draft, visit the city website at www.ShakopeeMN.gov/parkprojects.

This story originally appeared in the Fall 2019 Hometown Messenger.